As readers of this blog may or may not be aware, I kind of like eating smoked meats from time to time, and so I was pretty excited when I first heard of the opening of Old Faithful Bar and BBQ – claiming to serve “American BBQ done low and slow in our smoke ovens & matched with some of Australia’s finest beers”.

I did get a bit carried away with this review, I have provided a summary here.

On Thursday night, not feeling like cooking dinner, I decided to take Mrs Grillah out for a ‘date’ – how romantic!  However, I think she saw through to my ulterior motive of being able to check out Old Faithful and indulge in some delicious meats.

Mrs Grillah had asked if we need to book to which I informed her you cannot make bookings but as it’s new and on a Thursday it surely can’t be busy; boy was I wrong on the latter.

Walking in from quiet, empty King Street felt like walking in to a 1920s speakeasy – it was teeming with people, loud jazz playing and a smoky smell in the air (albeit a different, much more delicious smoke than the old speakeasies).

What kind of pet shop is filled with rambunctious yahoos and hot jazz music at 1:00 in the morning?

There are a number of large, picnic style tables and benches throughout Old Faithful – and unfortunately for us they were all currently occupied; however we were able to grab a seat at the bar which suited me just fine!

Our first move was ordering a drink – Mrs Grillah asked about the available red wines and settled on a grenache which she enjoyed.  Naturally I ordered a beer – there were about half a dozen taps poking out of the wall behind the bar, the selection comprised predominantly of Feral Brewery beers: Hop Hog, smoked porter, Sly Fox and the new saison; they also had Rogue Dead Guy Ale from the US and a cider.  I was expecting a few more US beers but I prefer the support of local brewery Feral as that’s what the BBQ joints in the US are all about: supporting local produce and local beer (plus Feral make damn fine beers).   I started with the Dead Guy Ale as I haven’t tasted it from a keg before.

We were supplied with a menu for ordering food, they explained that everything was available except the bar snacks as they are just waiting on delivery of the deep fryer.

I asked a waiter about the size of the Big Sur ($70), as I am a big sir and I wanted to try as many meats as possible, their opinion was despite the indication on the menu it is quite easily achievable by two people.

You order all the food towards the back of the restaurant so I set off to order the food and do a bit of exploring as I was keen to find out what they used to smoke the meat.

This actually didn’t take very long at all as it’s right in the middle of the open kitchen, a big smoke oven called the Smo-King 1100 which one of the chefs kindly opened up for me to have a look (excuse the camera phone photo, I’m not that comfortable blogging in public yet).

Truth be told I was a little disappointed as I was hoping to check out a commercial scale offset smoker or pellet grill, but the smell coming out of there was amazing.  That said, can you call it BBQ if it was made in a smoke oven?  Ultimately, it’s the end result that matters, and it’s certainly miles ahead of faux-BBQ joints like Tony Roma’s.

I placed my order at the counter and was told to wait there for a minute while they prepared it all!  I didn’t realise it all happened straight away, cutting slices from chunks of smoked meat sitting in a bain-marie.

The Big Sur arrived on a tray, individual servings of a variety of meats, slices of white bread, coleslaw, potato salad and burnt end beans (burnt ends are offcuts of a smoked brisket, chopped in to chunks and cooked further – delicious).

I was instantly reminded of the BBQ joints we visited on our travels to the US; keep it simple and serve delicious meat with some basic accompaniments so that the meat does the talking.  This is where most Australian restaurants get it wrong – no I do not want my pulled pork on a spelt grain sourdough roll with quinoa salad, just slap it on a piece of Tip Top and add BBQ sauce! 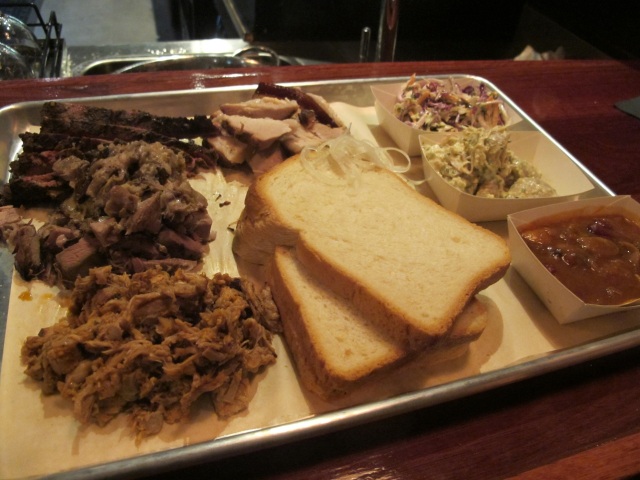 I started with the pulled pork (obviously) and on first mouthful the thing that stood out to me was a delicious smoky flavour, something I’ve been yet to experience in any of the plethora of Perth pulled pork offerings.  There wasn’t a great deal of sauce through the pork which initially disappointed me, but we quickly realised there are bottles of sauce available so you can season to taste (only missed due to our bar seat location).  The only thing I would like to see with the pulled pork is some bark, but that’s personal preference.

There is house BBQ, house chili and house vinegar.  This is a nice touch as the opinion on BBQ sauce varies widely across the US, South Carolina likes a lot of vinegar whereas a Kansas BBQ sauce will be tomato based and quite sweet.  Mrs Grillah was a big fan of the house BBQ sauce.

The smoked lamb is the one thing you would not typically see in a US BBQ house but, as with the beers, it fits in with the overall theme of keeping it local.  The lamb was juicy and had a nice, but not overpowering smoke flavour.

I wish I had taken a photo of the brisket because it had a killer smoke ring running round the outside of the slice – a clear sign of authentic BBQ.  The brisket was a bit dry, although I find this somewhat comes with the cut (certainly my attempts have been fairly dry so far).

I’m not entirely sure what cut of pork the chopped pig was, but there was some nice pieces of fat, skin and meat.  The meat was again a touch on the dry side which is a shame for pork as there is all that fat there to keep it moist.  This may have been due to the bain-marie.

Overall I was a big fan of the food – simply served meat with an incredible smoky flavour permeating through, accompanied by some solid sides and tasty sauces to round it off.

The other aspect that reminded me of the US was the service; the service was amazing!  From ensuring the menu was thoroughly explained through to keeping our drinks topped up the waiters and bar staff provided a top notch service, something frequently lacking in Perth.

Dinners out with Mrs Grillah will always result in a dessert order – she loves dessert as much as I love bacon (yeah, really!).  She opted for the apple pecan pie with stout cream ($8.50). 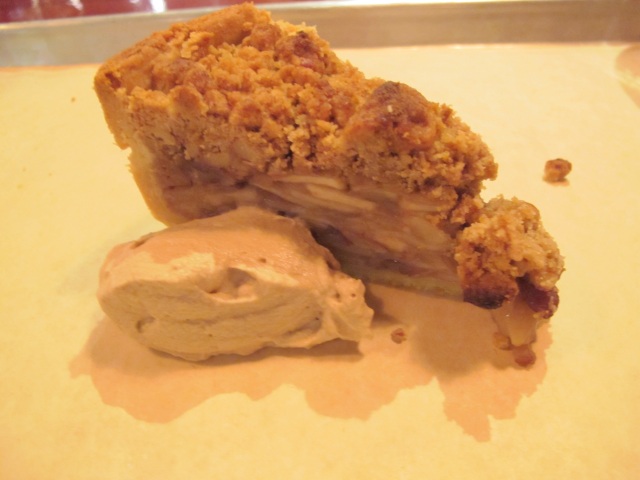 The pie was great, moist apple slices with a crunchy crumble on top; the stout cream, however was frickin amazing!  As the name implies it was cream flavoured with a stout beer.  I must learn how to make this, it was so damn good.

I will certainly be back to Old Faithful – its speakeasy atmosphere, delicious smoked meats, craft beers and friendly staff make this place a winner – and that’s only in the first week of business!