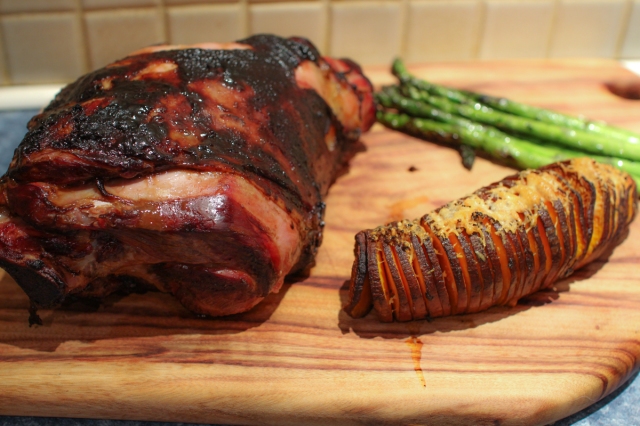 Vegemite is the quintessential Aussie umami flavour.  That said I imagine the reaction from your average Aussie would be “What the bloody hell is umami, mate?”

This week we explore how to apply a delicious umami flavour to a classic Australian dish: Roast Lamb.  I also revisit hasselback potatoes, this time using a sweet potato.

Chris from Urbangriller recently did an article on vegemite for US BBQ mag Storyque to explain the black magic behind this delicious umami spread.  It also referenced the Jump The Shark Lamb I invented for Australia Day earlier this year, making me want to revisit that flavour combo.

For those that don’t know, umami is commonly referred to as the fifth taste (the other four being salt, sweet, sour and bitter).  It is described as a ‘pleasant savoury taste’ and is found in things like gravy, soy sauce, mushrooms and vegemite.

This dish was for a mid-week dinner so a low and slow cut like lamb shoulder was out – I wanted to roast at a high temp so picked out a much more suitable leg of lamb.

As I had also just been sent a new meat injector I decided to ramp up dinner by creating a marinade to inject in to the leg as well, using hot sauce, beer, butter, garlic salt and, of course, more vegemite. 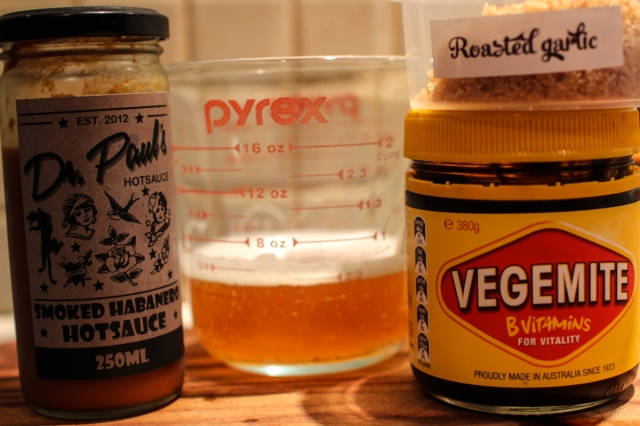 The garlic salt I picked up when I visited Salt, Meats, Cheese in Sydney recently.  They had a huge array of flavoured salts and a plethora of other gourmet treats.  Definitely heading back there over Christmas to investigate further.

With the days getting longer as we head in to summer it’s much more convenient to BBQ after work.  Using lamb and vegemite as my core ingredients I just had to fire up the Weber kettle to cook this one. 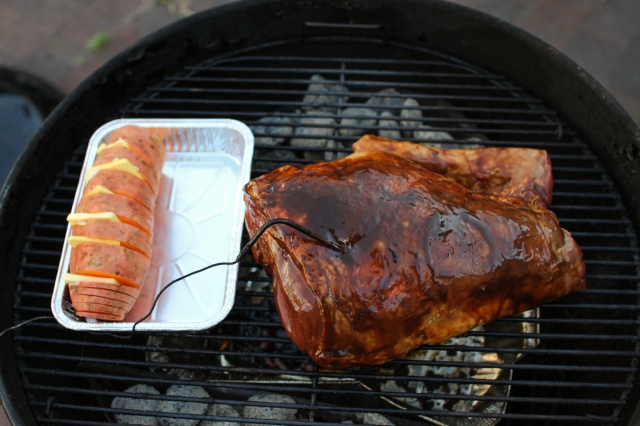 Instead of salt and pepper we’re seasoning the lamb leg just with vegemite – it’s got salt and umami and the maillard reaction will make for a tasty crunchy bark.

Slather that leg with the vegemite and then put it in your BBQ (or oven if you must) on a high roasting temp. 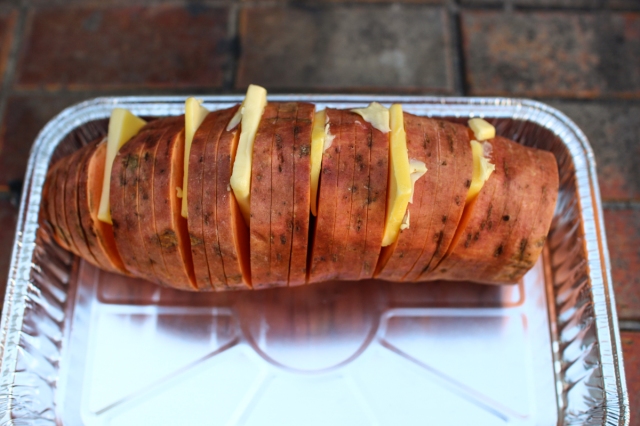 The hasselback potatos are pretty simple: wash the sweet potato, make thin slices taking care not to slice the whole way through, then insert some slivers of butter.  On a side note I saw these referred to as hedgehog potatoes the other day which I think is a way cooler name.

It doesn’t matter where you place the butter as during the cook you will spoon it back over the potato.  When you’re almost done sprinkle some parmesan over the top as well.

The lamb took just over an hour, finishing at an internal temp of about 60 degrees.  It was then rested in foil for about 20 minutes.  I would have preferred my lamb a little on the rarer side but it was still super juicy and tender.  The vegemite coated skin was the absolute bomb (flavour bomb, that is).

There were two heroes of this dish, the first being the shank – this vegemite coated crunchy morsel was so amazing that I ate it before I could take a picture. 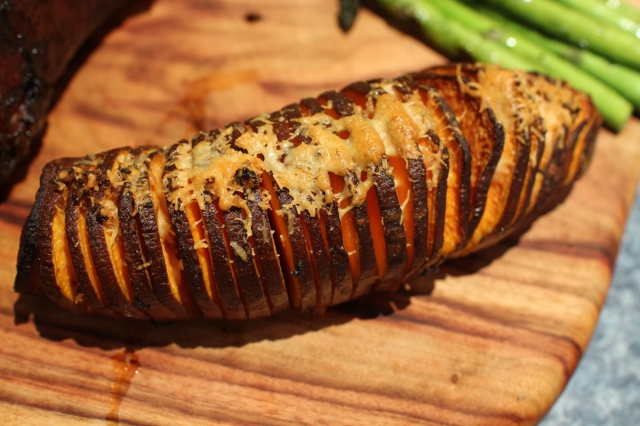 The second was the hasselback sweet potato.  I generally prefer sweet potatoes over regular potatoes so perhaps it’s my flavour bias showing, but I’d take this over the original any day.  Cooking them in the BBQ added an extra depth of flavour too.

So anyhow: vegemite.  Don’t just put it on your toast – cook with it.

Let me know if you’ve ever cooked anything awesome with vegemite.